Of Tidal Waves and Tunnels and Highway 99 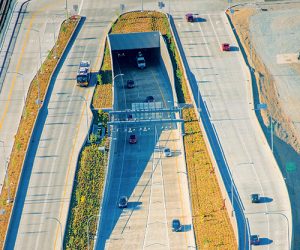 Here’s something scary I came across while researching my novel The Great Seattle Earthquake. The city’s brand-spanking-new Highway 99 tunnel, which plunges well below sea level near the south end of the waterfront is virtually without protection from a tsunami. Given that a major tidal wave ripped through this area 1100 years ago and we’re about due for another one, I get just a little worried thinking about it. Don’t you?

The image above shows an overhead view of the southbound lanes of Highway 99 emerging from the tunnel at ground level–and ground level is very close to sea level here, as I have explained before. Have a look at the area from another perspective:

I took this shot standing on a street corner in the waterfront district of Seattle (the spot appears in the first photo in the upper left corner). At first glance, you don’t see much, do you? Just a couple of stadiums in the background. But pay attention to what’s directly ahead if you want to share my heebie-jeebies. That long, low wall is the only protection those emerging lanes have, should a tidal wave come along. It’s about four feet tall judging by the white car just beyond its left end.

That’s it, folks. As I took the shot I was acutely aware that behind me, only about a city block away, was Puget Sound. Next, I took a hike around to get some other perspectives. Nothing I saw inspired confidence. The northbound lanes also drop into a hole in the ground with equivalent protection–that is, nearly none at all.

Here’s a shot of the northbound on ramp, or should I say down ramp? The lucky folks in the SUV passed through the tunnel and went on their way without interference from either earthquake or tidal wave. But look at the city Transit Authority vehicles to the right. They show, again, that the wall is about four feet high. And wait a minute, the spot where I stood to take the photo has no wall at all. The ramp starts right at ground level and is totally unprotected from a wave bigger than an inch or two tall. And tidal waves get A LOT bigger.

Finally, just for the eeriness factor, consider this shot of workers finishing construction of the northbound entrance about a year ago. Imagine an eight- or ten-foot wall of water pouring over the brink of the wall. It would make a thunderous roar comparable to Snoqualmie Falls and it would fill the tunnel far too quickly for anyone on foot, or in a car, to get out.

Maybe it’s time for some city planners to come up with a disaster-preparedness concept here. I’ve got an idea! How about some bigger walls?