Look at this cool closeup photo of a dinosaur’s skin. Scaly, scaly, scaly. Oops. Wait a minute. Something’s wrong here. That’s not dinosaur skin. I’ll tell you what it is in a bit. But first, let’s back up for a history lesson.

Ever since the first paintings and sculptures of dinosaurs were created back in the 1800s, artists have been portraying the big beasts as essentially overgrown lizards. That wasn’t terribly inaccurate based on the data available at the time. 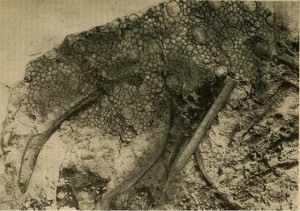 For instance, back in 1925, Charles Sternberg published a photograph of some fossilized skin he found while digging up the bones of the horn-faced dinosaur, Chasmosaurus. You’ve got to admit, the evidence for scaly-hidedness was pretty strong for old Chasmo. Click the image at right for a bigger view.

However, with little more evidence than that piece and just a few others, paleo-artists everywhere began to make paintings and statues of big scaly lizard beasts, even when all they had to work from was a bunch of bare bones. It turns out they were probably overdoing a good thing. Well, a reasonable thing, anyway.

Nowadays, even though there are quite a few good examples of dinosaurs of the not-so-scaly varieties, the overwhelming number of fossils still remain bones, not skin. So many a dinosaur has yet to be given a truly authenticated outer covering.

Some of us dinosaurologists, like me for instance, have gotten out ahead of the game and put some fur or feathers on a whole bunch of the critters without much hard fossil evidence supporting us. However, I’ll stand by my work, because there is some non-fossilized evidence to be seen in the present-day world. 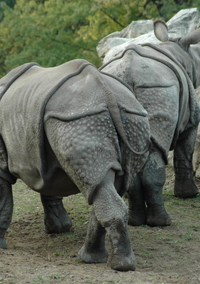 So, what sort of critter had that scaly hide in the first image? Here’s your answer: the Indian rhinoceros (okay a picture of the south end of one that’s going north).

So, let’s see now. Mammals are scaly. They don’t have fur.

Well, of course we know that most of them do have fur, and lots of it. So we’ve got a nice counter-example here to compare with dinosaurs.

Suppose a far-future paleontologist dug up a fossil of this rhinoceros with some skin attached, like Sternberg did so long ago with Chasmo. I suppose he would speculate that all mammals were scaly. But he would be wrong. 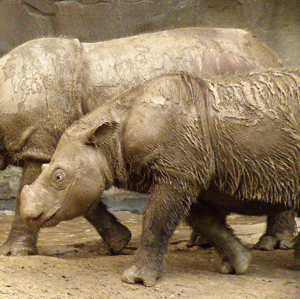 And now here’s one final twist.

He’s not so scaly. In fact, he’s rather hairy (and just a little gooey, being fresh from his mud bath).

And have a look at the picture below. A closeup of this guy’s leg shows us the ultimate in rhinoceros skin fashions: both scales and hair in the same place! 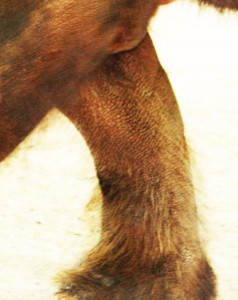 Click the image for a closer look. Will wonders never cease?

So, pity the poor paleo-artist. Whatever is he or she to do? Scaly? Furry? Feathery? All of the above? None of the above? Only time and a lot of fossil digging will tell, but I’m in favor of trying out a new concept now and then, as I did in my story Saving Pachyrhinosaurus.

And I’m not the only one thinking along these lines. Mark Witton has blogged a pretty nice piece on this subject, too.

One Response to Dinosaur skin — scaly or furry?